H is for Happy Happenstance

by Cami Ostman | Dec 4, 2018 | Inspiration, Reflections, SHE: Personal stories of women who changed my life 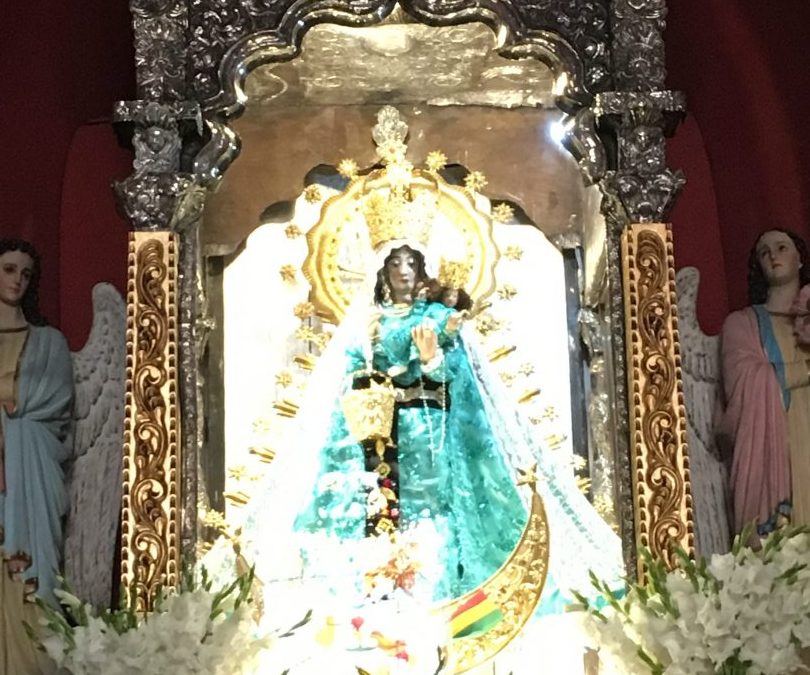 H is for Happy Happenstance

As you may know, I’ve been on a quest to visit some of the sites around the world that purport to feature sacred feminine energy. Before I tell you what happened yesterday as related to the Black Madonna of Copacabana, Bolivia, let me give a little background for my quest.

Mostly it’s a longer story than I can cover in a blog post. But the short version is this: I was a very conservative Christian for 20 years. And during all that time, one of the things that bothered me—a lot—was the patriarchal aspect of my faith. God was called Father; his messiah was a Son; men were in charge of the churches; husbands were the head of the family. Didn’t seem to matter who was more qualified to lead, the job was delegated to men. I once had a male leader tell several of us who were proselytizing on Hollywood Boulevard one Halloween that, “If members of your group feel leadings from God to go in different directions, follow the man’s leading. He’s ordained by God to lead, and he needs to get used to it.” There was at least one man per group, so none of us women would be led astray, I suppose.

When I left the church, I became largely agnostic. But of one thing I felt sure: I’d lived with the masculine archetype of divinity for too long, and I wanted to experience a feminine archetype that could connect me to experiences of the numinous. I didn’t want to pray to anyone per se; nor did I want to ask theological questions and try to wrap my brain around a new dogma, I just wanted to see what sort of stories were available and what it would be like to expose myself to goddess traditions. I wondered if I would feel connected to the idea of a goddess, purely from the perspective of the feminine having some power ascribed to it. So I began seeking out temples and other holy sites. I’ve been at this now for several years.

This leads me to the story at hand. I flew down to South America on Thanksgiving day. My plan: to run a marathon in Vina Del Mar and visit Valparaiso, a city I really enjoyed when I was in South America in 2014. My research told me that not far away, in Bolivia, there was a “Black Madonna,” a Catholic statue of the Virgin who was sculpted in the 1500s, I decided to make my way to her and to spend a few days in Copacabana, where she is enshrined.

The first day I visited the basilica, I had high hopes of seeing her and sitting in her chapel for a while to see if she would speak to me, but I was disappointed. She wasn’t there. Had I come all that distance only to encounter an empty glass case? All the guide books say that she is never removed from her shrine, so what was the deal? But then a local man told me they turn her around sometimes, facing her away from the chapel (so she can rest?), leaving the case empty so far as the public is concerned. He told me I should go back and check to see if she was available to hear the prayers of supplicants the next day.

When I returned to the cathedral the next day, there she was! A glowing apparition of turquoise and gold, lighted from beneath, her dark face (not very dark, actually, and looking quite European if you ask me) held a peaceful, even neutral expression, while she held the baby Jesus in her arms (who also looked completely unimpressed). 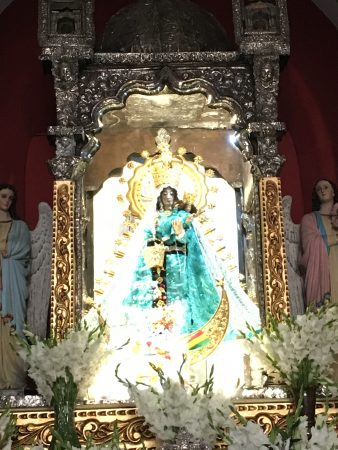 I sat in the chapel for a little under an hour, watching two women and their menfolk adorn the alter with fresh flowers. After the flowers were situated, each of them sat in a pew and prayed, mouths moving, offering (I assume) both praises and requests. Sitting in that echoey chapel, I tried to feel into her. Did she have any presence? I’ve felt a distinct sense of awe sitting quietly at other sacred sites like Lourdes in France, Glastonbury in England, and the shrine of Izanami in Japan. But here I felt nothing. She seemed like a doll and more than anything, I felt pity for her, spending all of her existence locked in a cage. She looked posed, like a model, for the adoration of men (more on this someday soon in my new book—stay tuned).

Chalking up my visit with her as something to check off a list, I turned to other tourist activities, took a tour of the two islands on the Bolivian side of the lake that still feature some intact Incan ruins (Isla del Sol and Isla de luna), then I took a bus back to Bolivia’s big city: La Paz. 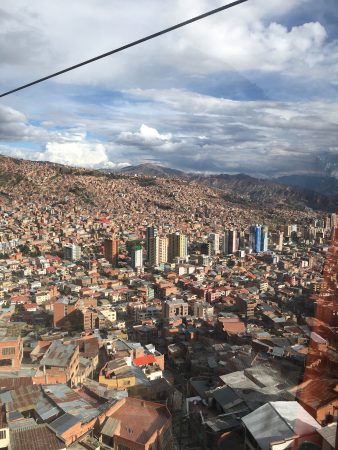 In La Paz now I wanted to take two walking tours—one in the morning at 11:00am and the other in the evening which would include dinner. After the first three-hour tour of the central part of the city, I had some time to kill, and decided to take a break at a café near the San Fransisco Cathedral.

I order a double latte in the café and at to rest my feet. On the walls, there was a display by an artist called Roberto Mamani Mamani. Vibrant colors depicting indigenous life and Bolivian landscapes grabbed my attention the moment I noticed the paintings. I’m a sucker for COLOR. Maybe growing up in the gray winters of the Pacific Northwest has made me irritated with muted colors, but anyway, I love bright primary or just off-primary colors. Mr. Mamani’s colors are like candy. LifeSavers, actually. Or Skittles. The whole rainbow in every image. Geez, I’d like to meet the guy who sees Bolivia in these bright colors, I said to myself.

One large painting especially jumped out at me from a distance, and when I got up to look at it closely, I saw it was entitled, Madonna de Copacabana. I studied it. Yes, there she was, a woman holding a child with a crescent moon beneath her denoting that her fertility had already led to her having given birth. But this Madonna was full and inclusive, not tiny and encased as the madonna in the church in Copacabana. Besides the baby Jesus, she also held other round faces in her embrace, indigenous faces. Clearly the artist was depicting her as Pachamama, Mother Earth. Arms open wide, she receives the whole of humanity. And her own features were truly in the image of the local indigenous people—round and dark—not thin European features as the Madonna in the Basilica.

I fell in love with her! She spoke to me the way the Madonna in the church had not, and I felt a tingle on the back of my neck. Determined to find out more about the artist, I asked the waiter about him and learned that Mamani is the most famous painter in Bolivia. My server gave me directions to his studio, which I thought I understood would take me out of the city center, but I resolved to go there the next day. I wanted to see Mamani originals before leaving La Paz, and perhaps even get a print or a poster of the Madonna/Pachamama.

That evening I took a Foodie Tour. Those of you who know me are laughing about this, since my palate was honed on Mac ‘n Cheese and hotdogs, and nowadays—even upgraded by a higher education and exposure to people who are devoted to food—I’ve not risen to delicacies much beyond mexifries from Taco Time. But truly I like to try new things, and I do love good food if someone else is preparing it for me. Beside, one of the hardest things for me in travel is eating. Outside of tourist areas where there are not English menus, you’re guessing and pointing. My anxiety always goes up, worried I’ll get something inedible and I’ll go hungry or have to get by with a bag of peanuts. So this time I decided to let someone show me the local cuisine and to enjoy the company of a handful of other travelers.
That night on the tour, we stopped at two of the stalls in the public market and ate first a pastry and then a thick smoothie with puffed rice. My three foodie compadres and I were full before we even got to the main courses. To give us a chance to digest and re-build our appetites, our guide Max took us on a walk up to a place called Jaen street. This is where the art galleries are.

And there, in front of us, was a gallery devoted to Mamani Mamani, the same artist I was introduced to only that afternoon! It was the only gallery open this time in the evening, by now about 7:30 pm. I was so excited! We’d stumbled on the very place I was planning on spending the next day finding.

I asked if there was time to go in. This request, I want to point out, represents a departure for me. Normally I wouldn’t want to put anyone else out, but one of my new commitments is to take up space without feeling apologetic. If no one else wanted to go into the gallery, I could catch up with them later. As it turned out, everyone was interested in seeing the paintings of the most famous painter in Bolivia.

I wandered the gallery. You can see the love in Mamani’s brush strokes, the energy of the mountains channeled in the concept of the world he depicts on the canvas. Once I’d been through the gallery, I asked the clerk if she had a copy of the Madonna and she did. I bought it straight away, pleased with the happy coincidence.

On our way out the door to continue our eating tour, Max said, “This is his home, you know.” We paused to look back at the building, and then Max added, “Please wait for one moment.” We all paused while Max took out his phone and made a phone call. I now assume he called the number on the outside of the building but at the time, I thought he needed a moment to make a personal call. He spoke to someone briefly and then he said. “We must go back inside. The artist is coming to sign your picture.”

Though it was past what I would consider working hours, inside the gallery, there was Mamani, a short, dark man in a painter’s apron, obviously called away from his work, smiling and ready to meet his new fans.

He wrote a little note to me on my poster, signed it, and posed for pictures. Gracious, smiling, and generous, he signed the pictures my new friends had purchased and then drew pictures on the backs of their prints! 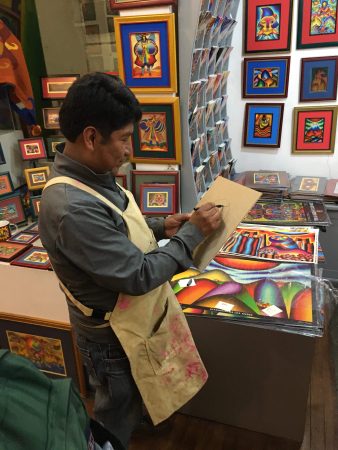 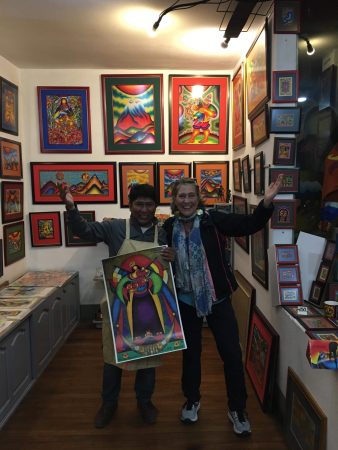 What luck, all of this.

I could conclude that perhaps the Goddess was leading me in the discovery of Mamani and a more connected interpretation of the Madonna I’d gone to seek out. I don’t land on this interpretation because as I said, I’m agnostic. Faith for me has suffered over the last decade or so, but I was elated by the happy coincidence of finding the painting, the gallery, and the artist all in one day—and for the FEELING of a sacred synchronicity organizing itself on my behalf. Feeling is enough. Especially if the feeling is “happy.”